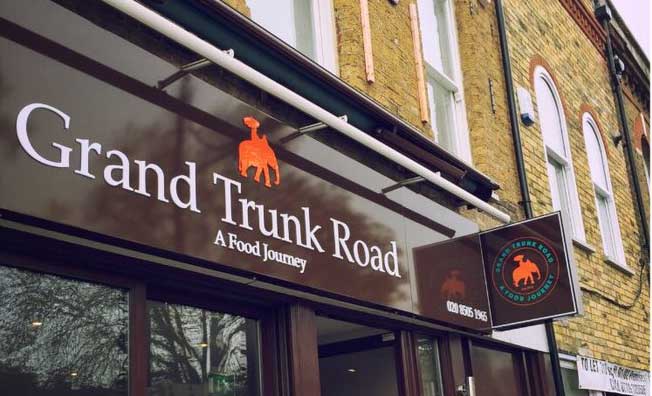 Shekha sets off to see if the latest venture from Rajesh Suri (formerly of Michelin-starred Tamarind; Imli Street and former-Michelin-starred Zaika) and head chef Dayashankar Sharma, is a worthy addition to London’s Indian fine dining scene…

Locals – it is clearly a neighbourhood favourite, South Asian cuisine enthusiasts who apparently travel from far and wide for the lamb shanks, fans of Suri’s previous ventures, parties of any kind, couples, those traversing the A road between London and Essex and people who seek out interesting spices

Since it opened in 2016, it is clear this latest offering from Suri has settled into the leafy greens of South Woodford like a Chesterfield sofa – comfortable but sophisticated. After an arguably shaky start (reviews for the restaurant were quite mixed), the place seems to have found its feet with the punters. The draw? South Asian cuisine inspired by Suri and Sharma’s travels along the vast Grand Trunk Road, a vast and ancient artery connecting Bangladesh to Afghanistan, showcasing a wealth of culinary traditions and flavours.

The restaurant is buzzing for a Tuesday night. It is difficult to spot an empty table and footfall remains high until closing time. Birthdays, anniversaries, dinner with friends, it is certainly popular for occasions and casual dinners alike. Suri himself flits about, chatting with diners, recommending dishes, every part the gracious host – which just adds to the neighbourhood charm of the restaurant.

Tastefully decorated with dark wood and cream accents, the long narrow space has been adapted for a luxurious and intimate vibe. Gold lattice panels adorn one wall – gently backlit by glowing orange. While the exposed beige brickwork is a contemporary contrast to the antique-looking South Asian doors which are decoratively hung here and there.

I start the meal with the ‘Infused G&T’. Admittedly the saffron in the saffron gin can’t quite permeate the strong juniper flavour of the drink but it is pleasantly warming with spice and citrus notes from added grapefruit. It pairs remarkably well with the choice of poppadum’s on offer, from roasted papads to the crispy far-far – a fried savoury South Asian snack food primarily made of potato starch and sago, usually seen in colourful shapes at Indian weddings and beloved by children and adults alike. This version is round like a poppadum with a sprinkling of cumin. I restrain myself from eating the lot.

All the dishes on the menus are inspired  from dishes and flavours along the Grand Trunk Road, with a splash of haute cuisine finesse thrown in. We opt for the tasting menu with wine pairing which, by London standards, is a steal at £78pp for five courses. The amuse bouche, a courgette fritter with a wonderfully punchy smear of tomato, pepper and garlic sauce and a mint and coriander chutney, is a delight. The two sauces dance around the palate, lifted by the courgette, which is like a little pearl of fun.

Seared scallops with the same tomato, garlic and pepper sauce divide us. The scallop is perfectly executed, soft and yielding like butter, yet I find the lip-smacking red sauce a bit too bolshie for its bivalve companion. My companion, however, vehemently disagrees.

Tandoori squid, stuffed with tilapia, crab and king prawn is delicious – gently smoky, soft squid yields to the seafood medley with ease. The elegant char on the squid is complemented by a sweet chili and mango salsa which imparts layers of flavour, with the addition of whole peppercorns and flecks of red chili. The 2016 Melodias Torrontes from Trapiche, Argentina is a well-suited pairing, its mild, light citrus and melon notes let the seafood do its thing with no interruption.

A kebab of minced chicken thigh is memorable, well-cooked and meaty with a slight astringency from red onion and aromatic coriander. A green chutney is a perfect accompaniment. Tandoori rabbit is solid, with an interesting but slightly under-seasoning of kabab chini, or tailed pepper, and timur, a variety of Sichuan pepper. The wine here, a 2016 MAN Chardonnay Padstal, with its slightly buttery herby finish, actually works to bring out the flavours of the delicate meat much more.

A palate-cleanser of lime and thyme sorbet hits the spot – extremely refreshing with refrains of sweet and salt taking turns to play out on the tongue.

Next comes the show-stopping lamb rogan josh. This is a far cry from a high street curry house slop. A roasted lamb chop glistening with achingly tender bits of fat and crispy char crests a medallion of spicy mash. While, surrounding it, like a glorious, glossy moat is a wonderfully tangy rogan josh sauce which coats the mouth like a velouté. Springy black pepper and cumin veg are fresh and crunchy, but alas woefully ignored by us in favour of the central dish.

A further accompaniment of black lentils slow-cooked with tomato and garlic is solid, its earthiness intensified by a powerful truffled naan, which is a perfect vessel for the various sauces. The 2016 Umani Ronchi, Podere Montepulciano d’Abruzzo works well but by now we are quite full and it comes off slightly strong.

Dessert is the weakest component of the meal; an orange and chilli chocolate cake has nice flavours but is dry and crumbly. Fresh fruits with yoghurt are a refreshing finish but seem almost an afterthought, lacking the edge to jostle for a place in the competitive Indian fine dining scene. A petit fours of pistachio magas and mango pastille is a nice touch, though.

The tasting menu is a good glimpse into the dishes Grand Trunk Road is creating, with no repetition of flavours and an interesting demonstration of classical elements blended with rustic techniques and dishes, all elevated to fine dining standard.

Nevertheless, while tasting menu is good value for money, I think some of the other dishes on the a la carte are quite steep for what they are.  Honestly, I am generally slightly sceptical about Indian fine dining, often coming away much more in favour of the homestyle dishes which have nourished a nation for years – but there is much to be said for the London chefs who are taking these culinary traditions and experimenting with them.

Furthermore, Suri’s passion for the restaurant industry and his food is infectious. The time he puts into every diner, taking them through dishes and explaining the origins, all won major plus points. With this level of dedication, I would be keen to see how the menu evolves in the future.

Could not authenticate you.

Got a foodie tip?

A Digital Meadows Production
Copyright | Tasting Britain | All Rights Reserved. | Legal Policy | Disclosure Policy
We use cookies to ensure that you have the best experience on Tasting Britain. If you continue to use this site, we'll assume that you're OK with this.Ok